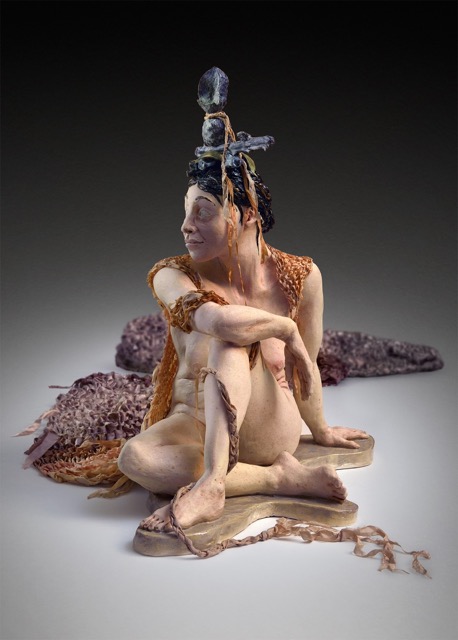 A lover of story telling, Crista Matteson turned to the magic realism of Gabriel Garcia Marquez, one of her favorite authors, for inspiration in her newest work.

Following Marquez’s death in April of 2014, she poured through all his books that she hadn’t read and kept his spirit in her head as she settled into her studio to begin a new line of her fantastical figurative and botanical sculptures combining ceramic, cast kiln glass, cast bronze and—this time—trails of knitted fabric.

For subject matter she turned other South American authors and to some of the grimmer classic fairy tales to find, as she said, humor in their darkness.

“As a parent, I find I am drawn to young adult fiction, coming of age stories and fairy tales, left in their original grotesque forms” Matteson said. “I spend time listening to the many stories tellers on public radio.  My art began in theater, working as a costume designer.  This current series draws from all these sources for inspiration to weave together my own narratives.”

“As a parent, I find I am drawn to young adult fiction, coming of age stories and fairy tales, left in their original grotesque forms”

Lebenwald, The Wood of Life

Central in Matteson’s show is a stunning, multi-piece installation, “Lebenwald, The Wood of Life,” which combines free-form botanical sculptures representational of a forest with the fairytale figure of Little Sister, who must flee the wood’s wrath after her capricious brother violated its decree that he could hunt there only for food and not sport.

In another major piece, “Tita, Wrapped in Sorrow,” a nude, half-scale woman drawn from Laura Esquivel’s novel, Like Water For Chocolate, is seated wrapped in an obsessively knitted shawl that she created to rid herself of sorrow after her parents abruptly separated her from her lover.

The Tita sculpture, as well as the full-scale, life-like “Wedding Crown for the Hedgehog King,” are indicative of Matteson’s new direction exploring more realistic figurative forms.

Wedding Crown for the Hedgehog King

The Tita sculpture, as well as the full-scale, life-like “Wedding Crown for the Hedgehog King,” are indicative of Matteson’s new direction exploring more realistic figurative forms.  To further this start she’ll attend the Gage Academy of Art, Sculpture Atelier program, for which she was awarded a scholarship, to study three-dimensional, formal sculpture.  It was through previous scholarship programs at Pratt Academy of Fine Arts that Matteson honed her metal working techniques and added her trademark cast glass and bronze elements.

The Hedgehog also demonstrates Matteson’s tendency to incorporate forms common in her daily life.  The crown’s glass chicken-feet came to mind because Matteson has for years kept chickens. As well, she often scatters colorful, glazed chicken eggs–for her a symbol of life–in her tableaus.

In her free-form and spontaneous botanicals, which she enjoys as an antidote to the concentration required in her figurative work, Matteson also incorporates interesting leaf patterns that she finds in her yard.

“My hope is to create work that has a visually intriguing impact on the viewer, an impact that stands up to the elusive nature of the narrative.”

Matteson has mentally paired her Hedgehog King, another fairy tale figure, with a luminescent pair of glass hands she calls “A Gift to the Bride.” In that tale, a cruel father cuts off his daughter’s hands to save himself from a deal with the Devil.  And because the Hedgehog King, in his tale, was cast out by his family, Matteson decided that these two unlucky souls should meet and marry each other.

Lips as Red as Blood

In “Lips as Red as Blood,” the heroine of a particularly gruesome Grimm’s fairytale is depicted carrying a basket of glass birds that she unleashes to save young girls being captured and eaten by an evil warlock.  Matteson made the figure into a rabbit, a coming-of age symbol common in fairytales.

“The technical challenge of combining components of kiln cast lead crystal, ceramics and cast bronze is exciting to me. Each material has its own particular beauty and strength,” Matteson said.  “My hope is to create work that has a visually intriguing impact on the viewer, an impact that stands up to the elusive nature of the narrative.” 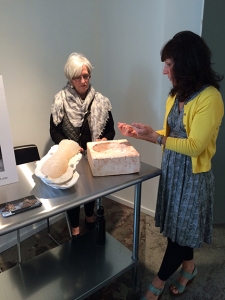 For a firsthand glimpse of Matteson’s magic being formed, she will demonstrate her art in the gallery Fridays and Saturdays 12:30 to 4:30 p.m.  As well, she will hold an artist reception Saturday, Sept 19, 5 to 8 p.m.