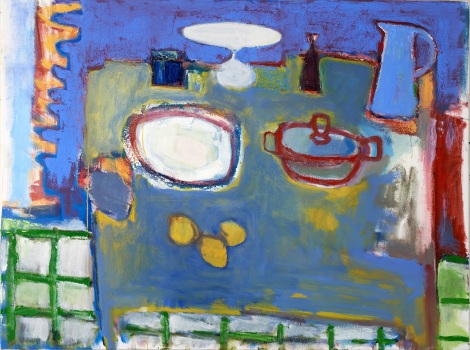 Through Jan. 30 at Shift Gallery

The genre of still life—the first thing novice artists learn to paint when they pick up a brush—is achieving new respect in the world of accomplished contemporary art, as Eric Day Chamberlain’s work in his Still Lifes show attests.

At a recent exhibition at the Norton Simon Museum in California—Significant Objects: The Spell of Still Life—the point was made that today’s still life art making, which both crosses over into three dimension and employs a multiplicity of mixed media, can showcase an artist’s skills, imagination and conceptual strategies as much or more than any other style of art.

“Chamberlainhas not yet run out of ideas for depicting them in forceful, engaging and inventive ways.”

Chamberlain, who has been focusing on painting, drawing and printing flattened and abstracted tabletop images—both of dinnerware settings and scenes of objects from his workbench—has not yet run out of ideas for depicting them in forceful, engaging and inventive ways. 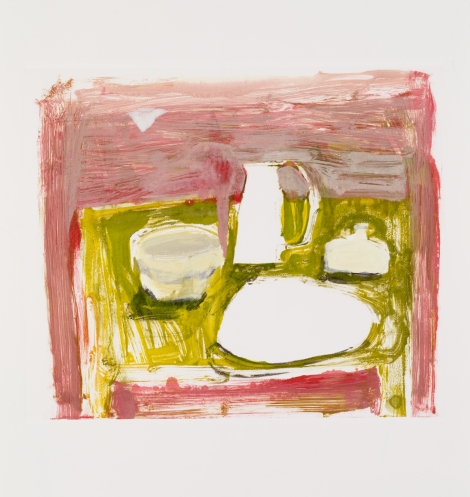 For instance, in his four-section ink, gesso, acid and collage “Grey Ochre on Paper and panel,” Chamberlain has brushed in yellow passages abutted against sketchy fields of grey with the ochre-colored ferric chloride (technically a salt) from his etching tool kit.

In his eight-panel assemblage, “Still Life,” Chamberlain resurrects large-scale paper sections from an ink and gesso on paper drawing he’d made in 2011 and, in framing them and hanging them in an irregular pattern, gives them new life.

In several of the water-based ink monotypes in his show, Chamberlain shows off the appealing dry-brush technique for which he’s known and which keeps students flocking back to his monotype classes at Pratt Fine Arts Center to learn from the master.

Chamberlain also mixes in classic oil paintings both on canvass and on paper, like his heavily textured  “Red Baker” oil on paper painting.  Like so many of his dinnerware settings, this one calls to mind the inspiration he picks up at his day job for a furniture and housewares seller. The featured red “baker” in the painting is an industry term for a popular and heavy casserole dish.

“Working in a housewares store has provided me ample subject material,” Chamberlain admits.  “More recently,” he adds, “I have incorporated architectural elements.”  These can be seen in paintings such as his blue-hued show card image, “Blue Pitcher with Lemons.”  Although the perspective is flattened, one can still make out an abstracted curtain at one edge and the tile work of the floor.

“One of the continuing attractions of still life painting for Chamberlain is that the familiar objects he reinterprets again and again give him a sense of home and comfort.” 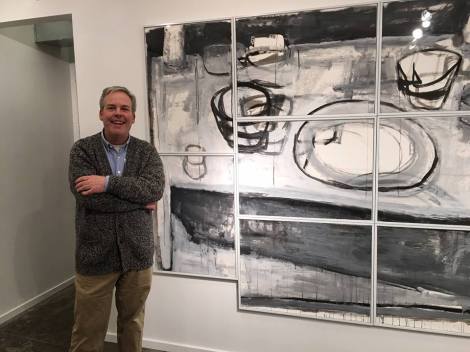 One of the continuing attractions of still life painting for Chamberlain is that the familiar objects he reinterprets again and again give him a sense of home and comfort, he says.  For instance, he manages to work in a favorite, cylindrical, earthenware pitcher into the vast majority of his work.

Also true for Chamberlain, his still lifes provide him the perfect platform for the expressive brushwork and mark making that are central to his signature style.  He may venture further into pure abstraction in future work, he says but it’s hard to imagine that his beloved earthenware pitcher won’t keep cropping up.